Annatto (Bixa orellana L.), popularly known as “urucum,” has been used by indigenous communities in Brazil and other tropical countries for several biological applications, which indicates its potential use as an active ingredient in pharmaceutical products.

Annatto (Bixa orellana L.) which is derived from the seeds of the achiote tree and often used as a coloring agent because of its bright color that ranges from yellow to deep orange.

Aside from its ability to color food naturally, it also contains antimicrobial properties and antioxidants which make it very useful for killing bacteria, aiding wound healing, supporting your cardiovascular and eye health, and protecting your liver.

Meanwhile, research has also shown that some people have allergy or intolerance to annatto, so it is advisable to introduce it into your diet slowly to make sure it doesn’t cause any adverse reactions.

According to a research being carried out on Annatto seed powder, it was concluded that Annatto seed powder had antioxidant abilities as well as water and fat holding capacity which might be suitable for incorporation with meat products. The redness values of pork patties containing annatto seed powder increased due to the presence of bixin and nor-bixin pigments (p<0.05).

Moreover, pork meat patties containing annatto seed powder were found to have reduced lipid deterioration, which resulted in lower TBARS and POV than the control sample.

The VBN values of the pork patties containing annatto seeds were lower than those of CTL at the end of storage (p<0.05). The addition of annatto seeds to meat products at a level of 0.25% appeared to be optimal for the manufacture of pork patties.

Therefore, the seed powder could be a promising source for natural antioxidants and antimicrobial agents that could be used in the production of meat products to extend the shelf-life.

The seed has been used as a natural colorant in many traditional foods found in Asia and it ranks second place in economic importance worldwide among all natural colorants and its extract shows antimicrobial and antioxidant properties.

Several previous studies have measured the antioxidant activities and color properties of different annatto extracts). On the other hand, numerous studies were performed based on the extraction of bixin compounds from annatto seeds using different techniques

Although most of the studies focused on the determination or optimization of the extraction methods for the compounds and their antioxidant activities, studies on the antioxidative and antimicrobial effects of annatto seed extracts on meat and meat products are limited.

Therefore, the objectives of the present study were to evaluate the efficacy of different level of annatto seed powder in preventing lipid and protein oxidation, and to determine the physicochemical and antioxidative activities of pork patties during 14 d of refrigerated storage.

The annatto tree belongs to the family Bixaceae and the genus Bixa. Despite the existence of several species, the most common in our country is Bixa orellana L., named after Francisco Orellana, who was the first European to navigate the Amazon.

Annatto is a small tree or shrub measuring from 3 to 5 meters in height, sometimes reaching a height of 10 meters. The trunk is short, measuring 20–30 cm in diameter, with dark gray bark with lenticels in vertical rows. The leaves are alternate, 10 to 20 cm long and 5 to 10 cm wide, sharp, green on both sides, and with extended petioles.

The seeds measure 0.3–0.5 cm in length and 0.2-0.3 cm in diameter, and their shape varies from pyramidal to almost conical. The number of seeds per capsule varies and each bivalvar capsule may contain from 30 to 60 seeds, on average.

The seeds are considered the plant part of commercial importance, since the pericarp (layer that surrounds the seeds) contains the pigments that have wide industrial application.

About 80% of this pigment is the carotenoid known as bixin, which has the dye property and can be extracted with vegetable oils or chemical bases. Depending on the cultivar and climatic conditions of the region, the bixin content can vary from 1 to 6% in the seed aril. The remainder is composed of other dyes and inert substances of minor importance.

Annatto’s Use in Traditional Medicine

Annatto is a native plant from South America, more specifically of the Amazon region. The popular name “urucum” comes from the Tupi word “ru-ku,” which means “red.” In Brazil, this plant is commonly known as urucum, urucu, açafrão, açafroa, and açafroeira-da-terra.

They also use it as an antioxidant and bowel cleanser. Annatto is sometimes put directly on the affected area to treat burns and vaginal infections and to repel insects. In foods, is used as an annatto coloring agent.

The wide dissemination of its use in those regions is related to the growing demand for natural dyes by many pharmaceutical, cosmetic, textile, and especially food industries.

According to research, the seeds urucum supplies seeds that have been used as a condiment as well as laxative, cardiotonic, hypotensive, expectorant, and antibiotic. In addition, it has anti-inflammatory activity for bruises and wounds and has been used for the treatment of bronchitis and for wound healing purposes.

Oil is also obtained from this plant. The infusion of the leaves has been shown to be effective against bronchitis, sore throat, and eye inflammation. The pulp, which includes the seed, is used for soft drinks and febrifuge.

Moreover, it can provide valuable dyeing materials such as yellow (orellin) and red (bixin) substances, with the latter constituting a crystallized active ingredient.

In the food industry, it is used to color butter, margarine, mayonnaise, sauces, mustard, sausage, soup, juice, ice cream, bakery products, macaroni, and cheese, where it is commonly called “do reino” (of the kingdom), coming from Holland.

It is also widely used in the printing industry and dye manufacturing. Many Aborigines use annatto for dyeing, where the dye is naturally obtained as a mixture and used to color ceramics and other vases for domestic use.

In addition, most endogenous people use this dye on their skin to beautify themselves during religious rituals and mainly to protect themselves from ultraviolet radiation and from mosquitoes that infest forests.

The bast provides fibers for rough cordage, and the powder resulting from grinding the seeds has been used as an aphrodisiac. Finally, the infusion of cold buds serves to wash inflamed eyes, whereas the decoction of the leaves has been used for antiemetic therapy during pregnancy.

Here are more resources and products to assist you further: 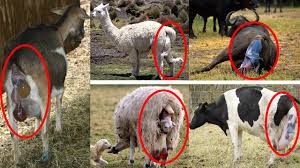 Things NOT to do when the animal is giving birth