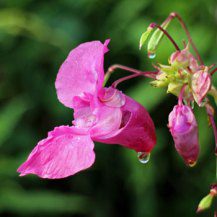 Balsam Flowers (Impatiens balsamina) are very easy to care for, it thrives in shadier spots, can tolerate heat and handle damp soil. Flowers come in almost every color of the rainbow, including red, orange, yellow, violet, white and pink.

Balsam flower or Touch-Me-Not, is a nearly forgotten annual flower that used to be a cottage garden favorite. It is related to the ubiquitous impatiens which have been ravaged by downy mildew, an airborne fungal disease.

Downy mildew has become such a problem that many nurseries no longer sell impatiens. Balsam, although related to impatiens, is resistant to this disease.

Its sun requirement is either a Full Sun or a Partial Shade sun and it requires a Well-drained soil, Zones: 3 – 7 with a Height of about 1 – 2.5 feet tall. It blooms in Early Summer – Mid‑Fall and Tolerates heat.

Balsam flowers requires 60 to 70 days from sowing to produce flowers, so an early start is essential. Learn how to grow balsam and enjoy these lovely colorful flowers through the end of the season.
Try growing Balsam plants from seed if you have a long growing season, or pick them up at your favorite nursery. Balsam plant care is trouble-free due to its resistance to many common garden pests.
It may be plagued by soil nematodes, powdery mildew or Oedema, but these problems are relatively infrequent. Balsam Plant Information Balsminaceae impatiens is a common sun to partial shade flowering annual. It is easy to grow and widely available at nurseries and garden centers.
Impatiens balsamina is known by the common name balsam or by the umbrella moniker of impatiens, which covers a wide variety of forms and tones. Balsam may also be found as “Rose Balsam.”
The flowers bear double petals and come in an array of colors but are partially hidden by large attractive leaves with pronounced veins. Balsams come in white, red, orange, yellow, violet, and pink.
These flowers resemble mini roses or camellias with the thickly spaced petals and tones. Some fun balsam plant information is found in another of its names: touch-me-not. The name is owing to the end of season pods which form and burst at the slightest touch.

Read Also: Astilbe Flowers – All You Need to Know

What is Balsam Flowers?

Balsam flowers (Impatiens balsamina) is native to India and Southeast Asia. It was brought to England during Victorian times by the intrepid plant hunters of that era. Their colorful flowers and neat, upright habit made them perfect as a bedding plant.

Their nickname, Touch-Me-Not, refers to their method of spreading their seeds. When touched, the seed pods literally explode spraying seed all over your garden.

Thanks to the ease with which the seeds germinate, balsam can become invasive in your garden. I often find myself pulling out seedlings in my garden.

The plants grow to 12” to 18” high. The flowers are double, resembling double impatiens and camellias. Flower colors are pink, white, rose, purple and red with many bicolors.

Flowering will continue until frost kills the plants. Unlike their hybrid impatiens cousins, balsam will come true from seed meaning the offspring will look like the parents which is usually not the case with hybrid plants.

How to Grow Balsam Flowers in Your Garden

You should plan on fertilizing them twice a week with a balanced fertilizer specifically formulated for flowers or you can work a lot of compost into the soil.

Because compost is not as nutrient dense as chemical fertilizers, you will need more compost than you would normally use in your flower beds. Balsam don’t mind summer heat waves but the plants need to be watered regularly.

They will stop flowering if they don’t get enough water. They will die if they dry out completely. A thick layer of mulch will keep the soil moist between waterings.

If you are purchasing plants, they should be spaced 12 inches apart.

How to Grow Balsam Flowers in Containers

It’s important to provide enough fertilizer to any plants grown in containers because each time you water nutrients are leached out of the soil. Those nutrients need to be replaced or your plants will not grow and thrive.

How to Grow Balsam Flowers from Seed

Start Your Seed Outdoors – You can direct sow your

seeds in your garden after your last frost when the soil has warmed. These are tropical plants. The seeds will not germinate in cold soil.

Sprinkle the seeds on the surface of the soil. Do not cover them. They need sunlight to germinate. Germination is quick, as little as four days. After the seedlings have developed their true leaves, thin them to 12 inches apart.

Start Your Seed Indoors – Balsam flowers seeds can be started indoors 6 weeks before your last frost. Surface sow the seeds in containers with pre-moistened soil. Do not cover them.

They need sunlight to germinate. I always moisten my soil before sowing seeds on the surface because if I wait to water until after I sow them, the water will wash the seeds out of the pots or cause them to float to one side or a corner of the container.

The seeds should start germinating within four days. Keep the seedlings well-watered. You can plant them outdoors after your last frost when the soil has warmed. Space your seedlings 12 inches apart.

Balsam’s colorful flowers light up the garden all summer. It’s easy to grow and will reseed itself for years of enjoyment. 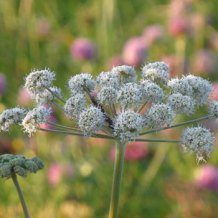 Angelica Flowers – All you need to know Begonia Flowers – All you need to know 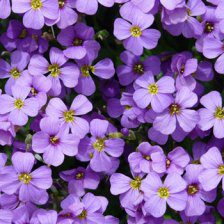 Aubrieta Flowers – All you need to Know