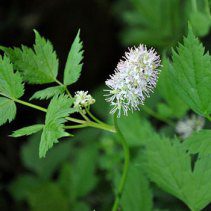 Bane berry Flowers (Actaea spicata) are perfect for cool, shaded spots; the Bane berry brings a holiday-inspired look to your garden. Before the Bane berry bears ornamental fruit, it features small white flowers. Beware though; the little red berries found on the plant are poisonous to eat!

It requires a partial Shade or Full Shade sunlight and a well drained soil. Zones: 3 – 9

With a height of about 1.5 – 3.5 feet tall, it also blooms in Late Spring and it is Non-invasive.

Bane berry is the common name for several species of plants in the genus Actaea. This group in the buttercup family (Ranunculaceae) has toxic berries, hence the name “bane” meaning something that causes death or a deadly poison.

The plants resemble the closely-related black cohosh or black bugbane (Cimicifuga racemosa) but the bugbanes have dry fruits, not fleshy berries like baneberry, so some taxonomists split them into two genera while others include them all in Actaea.

The genus is also closely related to Aconitum, another highly toxic plant genus which contains monkshood and wolfbane.

There are two bane berry flowers species commonly found in understory wooded areas of the Midwest.

Red baneberry (A. rubra) is more widely distributed, throughout most of North America in zones 3-7 except in the southeastern US, while white baneberry (A. pachypoda) is found primarily in the eastern and Midwest in zones 3-8.

Both species are found in moist, nutrient rich sites on many soil types and in a variety of ecosystems including deciduous, coniferous, and mixed forests, and along stream banks, in swamps and in other moist locations.

The compound leaves have coarsely toothed leaflets.
These herbaceous perennials emerge from a rhizome in the spring, producing one to several branching stems. Each stem has either three leaves that branch near the top, or three compound leaves and one flower stalk from the main central stem.

The leaves of the two species are virtually identical. Each compound leaf has 2-3 deeply lobed and coarsely toothed leaflets and hairy veins on the underside.

Sometimes leaves are tripinnate, with the 3 primary leaflets further subdivided into 3-5 (rarely 7) leaflets. The lower leaf surface is slightly paler in color than the upper surface.

The plants flower for about 3 weeks in late spring or early summer, producing a flower spike (raceme) covered with clusters of small white flowers. The raceme of white baneberry is generally taller than wide, while that of red baneberry tends to be as wide as it is tall.

Each individual ¼ inch flower has 4-10 widely spreading white petals, 15-40 large and showy stamens and a pistil with a very short, stout stigma. The numerous stamens give each cluster a feathery appearance.

The slightly fragrant flowers lack nectar and provide only pollen but are still attractive to some insects such as flies, bees and beetles.

Read Also: Azalea Flowers -All You Need to Know About

Small flower spikes (L) produce a cluster of small white flowers (LC) which have a feathery appearance, especially when the petals have fallen (RC and R).
If successfully pollinated, waxy, shiny, ellipsoid berries are formed.

The berries start out green but ripen by mid- to late summer and persist on the plant until frost. Red baneberry generally has red berries (white in A. rubra var. neglecta), while those of white baneberry are generally white with a prominent black dot (the persistent stigma) on each berry, giving rise to another common name, doll’s eyes.

Red baneberry also has the black dot but it is much larger and more striking on the white berries.

The inflorescence of white bane berry flowers thickens after bloom so it is much stouter and has bright red axes and peduncles (the “stems” and “branches” of the raceme), so the two species are easy to distinguish regardless of berry color.

This is the main distinction between red and white bane berry flowers. The fleshy berries contain several reddish-brown wedge-shaped seeds, with 10 or more in each red baneberry fruit and fewer but larger seeds in white baneberry fruits.

The entire plant is toxic but the roots and berries are the most poisonous. The cardiogenic toxins have not been identified. When ingested, the berries have an almost immediate sedative effect on the human heart and can lead to cardiac arrest if enough are consumed.

However, since the berries are very bitter, this is unlikely to happen. It was used medicinally by Native Americans. This poison does not affect birds, so they are able to eat the berries and are the main seed dispersers. Small mammals will eat the seeds, but not the pulp.

These native species can be good additions to shady borders or woodland gardens for their attractive foliage that remains attractive through most of the growing season, pretty flowers (the flowers are not as showy as black cohosh, though) and the conspicuous fruit which provide ornamental interest into the fall.

Their upright clump forming habit and light and airy texture contrasts well with coarse-leaved wild ginger (Asarum canadensis) and tall ferns. It can be used as a tall groundcover when planted in groups.

Combine one or both species of baneberry with early-blooming woodland flowers for season-long interest. The cultivar ‘Misty Blue’ of white baneberry was selected for its soft, bluish-green foliage.

Both species thrive in moist, fertile soil with lots of organic matter in partial to full shade (but will flower better with more light). Leave fallen leaves to allow leaf litter to build up. Plants can be cut back to the ground in late fall to tidy the garden, if desired, but is not necessary.

They are occasionally fed on by deer and small mammals but are rarely significantly damaged by wildlife. It is not affected by juglone so can be grown under black walnut trees.

Bane berry flowers can be propagated by division in early spring or from seed sown outdoors in the fall (although it typically takes 2 or more years to germinate under natural conditions) . Plants are slow growing and take a few years to grow large enough to flower.

Read Also: Aster Flowers – All you need to know

All parts of baneberry contain poisonous compounds and sensitive people can get symptoms just from touching the stems. Its leaves can be up to half a metre (20 in.) long and almost as wide.

The inflorescence is modest in relation to the size of the plant: even in bunches it has only two or three stems which have only a few dozen flowers.

Baneberry attracts its pollinators in shady broad-leaved forests with its bright white flowers and its fragrance: some people liken it to fresh grapefruit, while others find it disgusting.

Around fields close to the edge of the forest it might also be visited by rape blossom beetles. The plants are pollinated by flies in coniferous forests where beetles are not present.

Read Also: Angelonia Flowers – All you need to know

Baneberry also self-pollinates and unfertilised flowers also develop into berries – although there is reason to suspect if seeds from unfertilized flowers actually germinate.

In Lapland and the north-east of Finland baneberry is replaced by red baneberry (A. erythrocarpa), which can be differentiated by its more lobed (4–5 times pinnately lobed) and lighter coloured leaves, as well as its red berries.

Other species from the same genus
Red Baneberry, 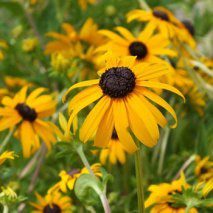 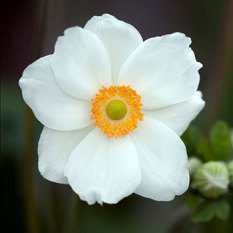 Anemone Flowers – All you need to know 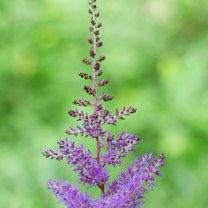 Astilbe Flowers – All you need to know