There are lot of diseases that fish can get from feeds which include food poisoning (especially when decayed feeds are served), Salmonellossis etc. the best thing is to always serve non- contaminated feeds to your fish and also report any sign noticed on your fish farm to your consultant who will help diagnose the source of the disease and prescribe adequate treatment.

The Dangers of Uneaten Fish Food

Let’s face it, it’s fun to feed our fish! It’s one of the few ways we get to interact with them, and it’s a great way to get shy fish to come out so we can observe them.

Unfortunately, overfeeding is not only detrimental to your fish, but also to the overall health and well-being of your aquarium. Here are some negative effects uneaten food can have on your aquarium:

Read Also: Importance of a Fish Feeding Point in a Fish Pond

The Feed Conversion Ratio, a major indicator of feed efficiency in fish farming

The feed conversion ratio is an indicator that is commonly used in all types of farming, as well as in the field of research. It can provide a good indication of how efficient a feed or a feeding strategy can be.
In the context of aquaculture, the F.C.R. is calculated as follows: F.C.R.  = Feed given / Animal weight gain.

In other words, the F.C.R. is the mathematical relationship between the input of the feed that has been fed and the weight gain of a population. There are no measurement units used in writing the F.C.R. The lower the F.C.R, the higher the weight gain obtained from the feed. When applied to aquatic animals, this F.C.R is generally lower than that of land animals, as shown in the table below.

Its calculation requires the following variables:

The F.C.R is simple and objective. For these reasons, it is a valuable indicator in the context of fattening farms. It is determined by comparing the initial input of feed (initial amount of feed fed) with the final output of the fish or shrimp that are produced.
The practical limitations of the F.C.R.

Even though the F.C.R. formula is simple, its practical application is much more complex. What other sources of information are available at the farm level in order to provide a more exhaustive idea for the efficiency of a feed?

When it comes to evaluating the level of performance obtained from a feed, there are other indicators that can complement the F.C.R. A useful indicator for farm management is one that highlights a poor technical result. Its regular application also grants the ability to keep track of the improvements that have resulted from the ensuing corrective actions taken.

Read Also: When to Feed your Fishes after Stocking

Here are some other amazing fish farming books to guide and assist you further below: 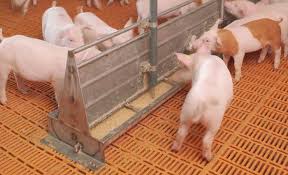 9 Ways to Fatten Up your Pigs the Right Way