Inter-cropping is a multiple cropping practice involving growing two or more crops in proximity. The most common goal of inter-cropping is to produce a greater yield on a given piece of land by making use of resources or ecological processes that would otherwise not be utilized by a single crop.

Intercropping can also be defined as the practice involving growing two or more crops simultaneously on a same piece of land. The main advantage of inter cropping is getting higher returns from the same piece of land which otherwise not be utilized by a single crop.

Intercropping is quite common around the world and it is not just farmers but also hobbyists and gardeners who practice intercropping. There are advantages and disadvantages of intercropping. You should consider the rewards and challenges before you decide either way.

Inter cropping needs a careful planning wherein the soil, water, climate, light etc are taken into account. While planning inter cropping it is important to select the crops which do not compete with each other for space, nutrient, water or sunlight.

It is advisable to grow crops like shallow rooted crops with deep rooted crops, tall crop with a short plant, shade loving plant with light requiring plants, early maturing crop with late maturing crops etc. Such planning will ensure the added yield advantage for the farmers from multiple crops.

Inter cropping also helps in providing mutual benefits to the crops. For example, growing legumes along with cereals, vegetables will fix atmospheric nitrogen in soil and thereby improving the nitrogen uptake to the adjoining plants.

Read Also: The Different Nutrients Required by Crops at each Growth Stage

(2) It acts as an insurance against failure of crops in abnormal year.

(3) Inter-crops maintain the soil fertility as the nutrient uptake is made from both layers of soil.

(5) Inter-crops provide shade and support to the other crop.

(8) It helps to avoid inter-crop competition and thus a higher number of crop plants are grown per unit area.

(1) Yield decreases as the crops differ in their competitive abilities.

(2) Management of /crops having different cultural practices seems to be difficult task.

(4) Higher amount of fertilizer or irrigation water cannot be utilized properly as the component crops vary in their response of these resources.

The primary goal of intercropping is to achieve the highest potential yield off a particular field by maximising the potential of the resources present at a given time.

It is a system which has already been used traditionally by small-scale farmers in tropical climates where a cereal and legume intercropping combination is commonly found.

There are different approaches to intercropping such as:

Whenever two or more crops are planted together they will compete or facilitate (assist) for light, water and nutrients. Therefore, they could have a negative or a positive influence on each other.

Successful intercropping depends on a good balance between competition and facilitation. Examples of strong facilitation is where legumes improve soil quality due to their nitrogen fixing character or where a second crop acts as a cover crop which shades the soils and increases water retention or serves as a windbreaker that shelters a crop or reduced wind erosion.

The other side of the coin is where the secondary crop competes with the primary crop for moisture, space and nutrients.

The main motivation behind intercropping is to improve output per hectare but this can only be achieved with careful crop selection and continuous attention to detail.

There are some farmers who use intercropping to improve the density of the organic material in the rows to reduce soil temperature and retain soil moisture.

In this case they refer to the secondary crop as live mulching. This means it is important to understand each crop’s water requirements throughout the growing season.

One of the main reasons for intercropping in a commercial enterprise is an attempt to address the need for animal feed, particularly during the dry season.

It is common practice for animals to graze on maize stover after the harvest has been completed however maize stover with its low protein content does not have high nutritional value. One way of improving the quality of the winter grazing then is intercropping. 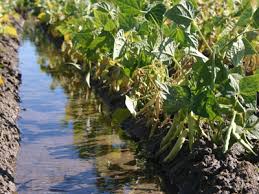 Methods of Irrigation and Water Use for Dry Beans