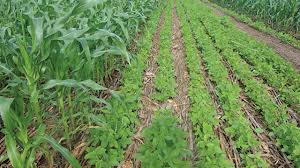 Meanwhile, The alternative practice of growing two or more crops simultaneously on the same field is called inter-cropping. The various crops in the inter-crop do not necessarily have to be sown or harvested at the same time, the main requirement is that they are on the field at the same time for a significant part of their growing periods.

Read Also: The Definitions and Classifications of Cropping System

Factors that determine the crops combination and spatial arrangement

LER can also be calculated based on the monetary value of the yield obtained from the various inter-crop and sole crop situation and make comparisons on the basis.

Calculating LER by comparing the total energy value of the yield in kilo calories in various situations and compared the values to determine which arrangement was most beneficial.

Read Also: Advantages of Continuous Cropping as a Type of Cropping System

The Reproductive Rate of Sheep and Goat

2 thoughts on “Inter-Cropping and Types as a Cropping System”