Rabbits are vulnerable to several internal parasite infestations. These include pinworms, which mature at about 1 inch. You can see these thread-sized worms in the feces of infected bunnies. Tapeworm segments may appear in the stool or around the anus of affected rabbits. Rabbits feeding on grass or pasture may consume Fasciola hepatica, or liver flukes

The protozoa coccidia often affects young rabbits. These minute creatures can’t be seen with the naked eye. Your veterinarian must confirm their presence by examining a rabbit’s feces under the microscope.

Meanwhile, where a pin worm problem is diagnosed, the infection is easily treated with an anthelmintic such as piperazine or fenbendazole. Ivermectin is thought to be ineffective against pin worms in rabbits. Routine worming is often indicated in breeding colonies and on rabbit farms.

Aside from other rabbit realated issues and questions like: are rabbits rodents?, how long do rabbits live?, what do wild rabbits eat? and many more, you also need to understand how internal parasites in rabbits can affect your productivity resulting to low performance and low income for you as the rabbit farmer.

It’s crucial to know the type of parasite affecting your pet so that you use the right dewormer for eradication. While many dewormers are available over the counter, don’t use any product without your veterinarian’s approval. Take your bunny to the vet for diagnosis, and bring a fecal sample. Your vet also can provide you with the correct dosage for your bunny.

If you have more than one rabbit and they are in contact with each other, treat all of them, even if some appear asymptomatic.
Piperazine, available at pet stores, will get rid of pinworms. You must deworm your rabbit once weekly for three weeks to eliminate both the mature and immature worms. Check the rabbit’s feces to ensure there is no sign of pinworms once treatment is finished.

Praziquantel can kill tapeworm and liver flukes, usually with one dose. Your bunny may experience temporary side effects, such as diarrhea or appetite loss, after receiving the medication. Call your vet if your rabbit doesn’t start eating or eliminating normally within a day or so.

According to research, Rabbits are known to be parasitised by a number of different internal parasites. These can be divided into round worms (nematodes), tapeworms (cestodes) and protozoa.

Roundworms, or “nematodes” as they are more properly known, do occur both in wild anddomestic rabbits. The only round worm to occur commonly in domestic rabbits is the oxyurid worm, or Passalurus ambiguus – also known as the “pin worm” because of its small size. Adult worms ofthis species measure five to 10mm and are found in the caecum and large intestine.

They do not generally cause clinical problems in the adult rabbit but may be associated with poor hair coat, weight loss and a perineal dermatitis. By contrast, young rabbits may be affected by heavy infestations of this worm, particularly at the time of weaning when the microflora of the hindgut has yet to establish itself.

Affected young rabbits may show signs of diarrhoea, lethargy, anorexia and weight loss. The pin worm has a direct life cycle and as such has no intermediate host. Eggs are ingested bythe rabbit when grazing on contaminated food. The environment can be heavily contaminated with pin worm eggs where large numbers of rabbits are kept under intensive conditions.

Farmed rabbits and breeding colonies may therefore experience problems with pin worms, which may be seen asdips in productivity and poor reproductive performance. Where a pin worm problem is diagnosed, the infection is easily treated with an anthelmintic such aspiperazine or fenbendazole. Ivermectin is thought to be ineffective against pin worms in rabbits. Routine worming is often indicated in breeding colonies and on rabbit farms.

The rabbit acts as the intermediate host for a number of tapeworms, otherwise known as cestodes. The definitive host of these tapeworms is usually a dog, cat or fox. Where dogs, cats and foxes visita rabbit owner’s garden the potential exists for the rabbit’s grazing area to become contaminated.

The lawn becomes contaminated when an infected definitive host passes tapeworm segmentspacked with eggs in its faeces. Grazing rabbits can then ingest these eggs and become infected.

The tapeworm eggs hatch in the rabbit’s intestine and then migrate within its body. They have thepotential to produce cystic structures within the rabbit’s tissues. Cysticercus pisiformis is the larvalstage of the dog and fox tapeworm Taenia pisiformis. Large numbers of oval-shaped cysts may then be deposited within the rabbit’s abdomen. These can cause abdominal discomfort and swelling.

Coenurus serialis is the larval stage of the tapeworm Taenia serialis, which also has the dog andfox as its definitive host. The larval stages of this tapeworm migrate to the subcutaneous tissues where they form cysts under the skin. These may be felt as soft, fluctuant swellings.

As is so often the case, prevention is better than cure. Dogs and cats accessing a rabbit’s grazing area should be regularly wormed (three to four times per year) and their faeces picked up and disposed of. Foxes should be excluded from gardens where possible, and any fox faeces should be removed from the lawn at the earliest opportunity.

Currently, there is no reason to routinely treat pet rabbits for roundworms and tapeworms. Pasture and environmental contamination can be minimised by rotating the grazing area, cleaning the hutch environment regularly, preventing faecal contamination of food bowls and hay, keeping the rabbit population density low and avoiding pasture contamination with cat, dog and fox faeces.

While there are some 16 species of eimerial parasites affecting rabbits, they rarely pose a problemto the domestic rabbit. Eimerial parasites are responsible for causing coccidiosis. Infection isacquired following the ingestion of oocysts found within the environment.

Heavy environmental contamination may be seen in farmed rabbits and breeding colonies and is usually the primarycause of clinical coccidiosis. Young rabbits are usually most severely affected as they are unlikely to have built up any immunity to the disease. Hepatic coccidiosis is caused by the rabbit-specific protozoan parasite, Eimeria steidae.

This parasite is unusual in targeting the rabbit’s liver, whereas other species of Eimeria infect therabbit’s intestinal tract. Clinical signs of hepatic coccidiosis may vary as a function of the severity of infection and the immune status of the individual. Signs include weight loss, ascites, jaundice, diarrhoea and an enlarged liver.

Treatment may be required in the face of disease outbreaks, but the condition is preventablethrough good husbandry. In the domestic rabbit, sensible hutch hygiene and low stocking densities will ensure that faecal build up is kept to a minimum and coccidiosis avoided.

T gondii is an intracellular coccidian parasite and causes one of the most common parasitic diseases of animals and man. The disease produced by T gondii is called toxoplasmosis. The definitive hosts for the parasite (the only animals in which the organism reproduces sexually) are members of the Felidae family.

Almost any other warm-blooded mammal, including rabbits, can, however, act as an intermediate host.Cats usually become infected by T gondii following ingestion of encysted organisms present in the tissues of a chronically infected intermediate host. The oocyst wall is digested by the cat, releasing infectious organisms into the intestinal lumen.

Shedding continues forapproximately 10 to 14 days, during which time the environment is contaminated with manymillions of oocysts.Intermediate hosts, such as the rabbit, become infected following ingestion of sporulated oocystsfrom the environment. As in the cat, a cycle of infection occurs throughout the body, and thesubsequent immune response results in the development of tissue cysts.

The tissue cysts probablyremain viable (contain infectious organisms) for the life of the animal. Unlike infection in the cat, anenteroepithelial cycle (with oocyst production) does not occur in intermediate hosts.The incidence of toxoplasmosis in rabbits will reflect the degree of contamination of theirenvironment and their food matter, particularly from cat faeces.

Acuteonset toxoplasmosis may be seen in young rabbits (baby rabbits) and is characterised by lethargy, anorexia, fever (more than 104°F), a raised respiratory rate, oculonasal discharge and the development of central nervous signs. Adult rabbitsare likely to recover from toxoplasmosis.

Infections obtained during pregnancy are likely to result in the loss of the foetuses. As with roundworm and tapeworm infections, the most important piece of advice that can be givento a rabbit owner is: do not allow cats to contaminate your rabbit’s environment.

This protozoal parasite is now known to be widespread within the British domestic rabbit population. The parasite can infect a number of mammals and has been recorded in rabbits, cats,dogs, foxes, sheep and goats as well as in humans.

Infective spores are shed in the rabbit’s urine and transmission typically occurs following theingestion of contaminated food and water. Following ingestion, the parasite is carried to a range of organs by the white blood cells. Organs, including the kidneys, liver, central nervous system, lungs and heart are all targeted.

A wide range of clinical signs can arise in the rabbit. These include neurological signs, such ashead tilt, hindlimb weakness, paralysis, tremors, convulsions and urinary incontinence. The rabbit’s eyes may develop cataracts and an inflammation of the inside of the eye (uveitis).

Prevention of infection may not be possible given the prevalence of the parasite within the domestic rabbit population. Where a breeder wishes to establish a disease-free colony, this can be achieved through an extensive testing programme. Good hygiene practices will help reduce the incidence of infection.

Food bowls can be raised to reduce the possibility of them becoming contaminated with urine, while water should be provided in drinking bottles rather than bowls.The use of prophylactic fenbendazole in feed has not been fully evaluated. It is currently mainlyused as a treatment for infected individuals.

Read Also: Complete Guide on How To Start a Successful Chin Chin Business 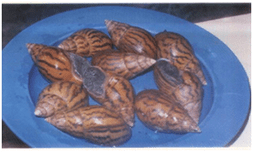 SOURCING, SELECTION AND STOCKING OF SNAILS

How to increase Passion Fruit Yields