Backyard soil is very rich in organic matter and nutrients from household refuse which is dumped there. Such gar-dens are permanently in use for plantains which grow there luxuriantly, become very large and produce heavy bunches. They grow in groups or clusters as each bearing plant produces many suckers which are not pruned out. Human activity is limited to manuring, propping and harvesting.

Since the demand and thus the price for this crop are continuously increasing, many farmers want to grow more plantains in order to raise their income. However, backyards cannot be readily extended since they are enclosed by houses or fences. The only way, therefore, to expand production is to grow plantains in fields at some distance from the village.

In most cases such field-grown plantains are very poorly maintained. The result is a very modest yield from the first year onwards. Different methods of cultivation should accompany the change in site to achieve and sustain high-level yields for several years.

Plantain production in Africa is estimated at more than 50% of worldwide production (FAO, 1990). Plantain (Musa spp.) is ranked third among starchy staples and occupies a strategic position for rapid food production in Nigeria. Nigeria is one of the largest plantain producing countries in the world.

1) Bunch or inflorescence: which is composed of many flowers, the bunch emerges between the leaves and is attached to the plant by a rachis or fruit stalk. The many protuberances on the rachis are called “glomerules”.

Each glomerule bears a group of flowers, also called a “hand”. Edible fruit (or fingers) develop from female flowers located at the first 10 glomerules of the bunch.

Neutral flowers (also called hermaphrodite or intermediate flowers) appear next but do not develop into fruit as their ovaries cannot swell to form pulp. The purple bud at the end of the bunch is called the “male bud” and consists of bracts covering groups of so-called male flowers. This male bud may be absent or present when the bunch reaches maturity.

2) Pseudo stem with foliage leaves: The cylindrical structure rising from the soil and carrying the foliage is not a stem in the true sense. It is a “false” stem or pseudostem because the growing tip (or meristem) of the plant remains near soil level. As the false stem consists of overlapping leaf sheaths, plantains are like giant herbs and not like trees.

The leaf sheaths render support to the rachis of the mother plant. Young suckers (shoots from the main plant which can develop into bearing plants) have narrow, lanceolated leaves which are called scales and are easily distinguishable from the large foliage leaves.

3) Underground corm with suckers and roots: The corm, sometimes wrongly called a bulb, is the true stem of the plant as numerous roots emerge from the corm, most of which grow horizontally at a depth of 0 to 15 cm. Roots are whitish when young and healthy and become brown with age. If infested by nematodes, they become brown or even black or show protuberances.

The growing tip (or meristem) at the top of·the corm continuously forms new leaves and later becomes the inflorescence. The corm produces many branches, called “suckers”, and the whole unit is often referred to as the “mat” or “stool”.

After the plant crop has been harvested, the mother plant is cut down and the suckers are thinned. Although all suckers are followers or daughter plants, the cultivator selects one (the ratoon) to continue the next cycle of production. The second harvest from the plantain mat is called the “first ratoon crop”. The third harvest is the second ratoon crop, and so on.

Read Also: Complete List of Anti-Inflammatory Foods you Should Know About 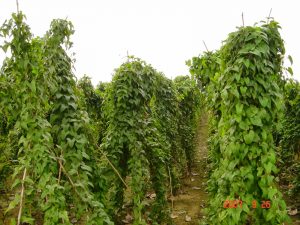