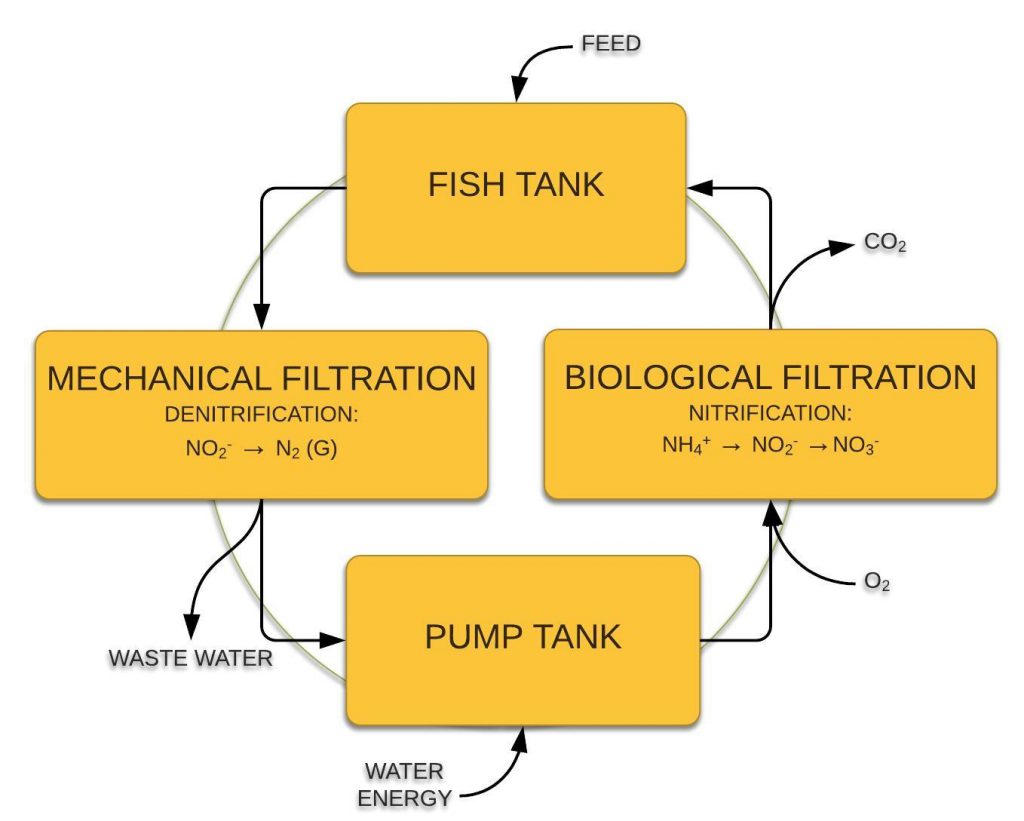 Recirculating Aquaculture System (RAS) of fish farming is such that water being used in the pond is recycled. For instance rather than flushing out dirty water, the water is passed through a system that will sieve out the dirt from the water and then the same water is returned back into the pond for use by the fish.

Recirculating aquaculture system, or RAS, provide a constant and controlled environment for the fish, allowing for optimal and fully manageable production of African catfish, Tilapia and other fish species.

Now am sure you may also wish to know if this system has any advantage over earthen pond and flow through system of fish pond, well the advantage it has is that it helps in conserving water and so is best suitable for areas with limited supply of water as water is recycled for re-use.

Also, pond management does not easily constitute a nuisance to the neighborhood as the water to be flushed out is re-used but the major disadvantage is that it needs regular supply of electric power to operate and so in a country like ours, operating it could be expensive.

Read Also: Recommended Volume of Water for Fish Farming on a Concrete Pond

Recirculation aquaculture is essentially a technology for farming fish or other aquatic organisms by reusing the water in the production. The technology is based on the use of mechanical and biological filters, and the method can in principle be used for any species grown in aquaculture such as fish, shrimps, clams, etc.

Recirculation technology is however primarily used in fish farming, and this guide is aimed at people working in this field of aquaculture. Recirculation is growing rapidly in many areas of the fish farming sector, and systems are deployed in production units that vary from huge plants generating many tonnes of fish per year for consumption to small sophisticated systems used for restocking or to save endangered species.

Recirculation can be carried out at different intensities depending on how much water is recirculated or re-used. Some farms are super intensive farming systems installed inside a closed insulated building using as little as 300 litres of new water, and sometimes even less, per kilo of fish produced per year.

Recirculating aquaculture systems (RAS) operate by filtering water from the fish (or shellfish) tanks so it can be reused within the tank. This dramatically reduces the amount of water and space required to intensively produce seafood products. The steps in RAS include solids removal, ammonia removal, Co2 removal and oxygenation.

The water in the system is recirculated through tanks and a series of water treatments to remove waste products. Unless the water is treated, fish will stress, resulting in retarded growth, increased pre-disposition to disease and finally death.

Production tanks vary in size and shape. Smooth, round tanks with sloping bottoms are useful as solids can be concentrated and subsequently removed from a centre drain. This design facilitates thorough cleaning and ensures aeration is evenly distributed.

Depending on your location and the species you are planning on farming, you should consider including other components such as disinfection devices, foam fractionators (or protein skimmers), dedicated aeration units and temperature control.

You should also make sure you have access to water quality testing equipment, a purpose-built facility to accommodate bulk feeds and hygiene measures to limit the spread of disease.

Read Also: The Recommended Feeding Levels for Catfish at a Water temperature of 27-28°C

The advantages of farming in RAS are:

To allow the use of RAS grow outs, there are a few constraints in respect of infrastructure, feeds and staff:

Recirculating Aquaculture System grow outs are the best option for locations close to or in cities, with good availability of electricity. Next to this, using RAS technology is the only possibility for farming tropical fish species in moderate to cold climates indoor.

A basic Recirculating system consists of the following components: 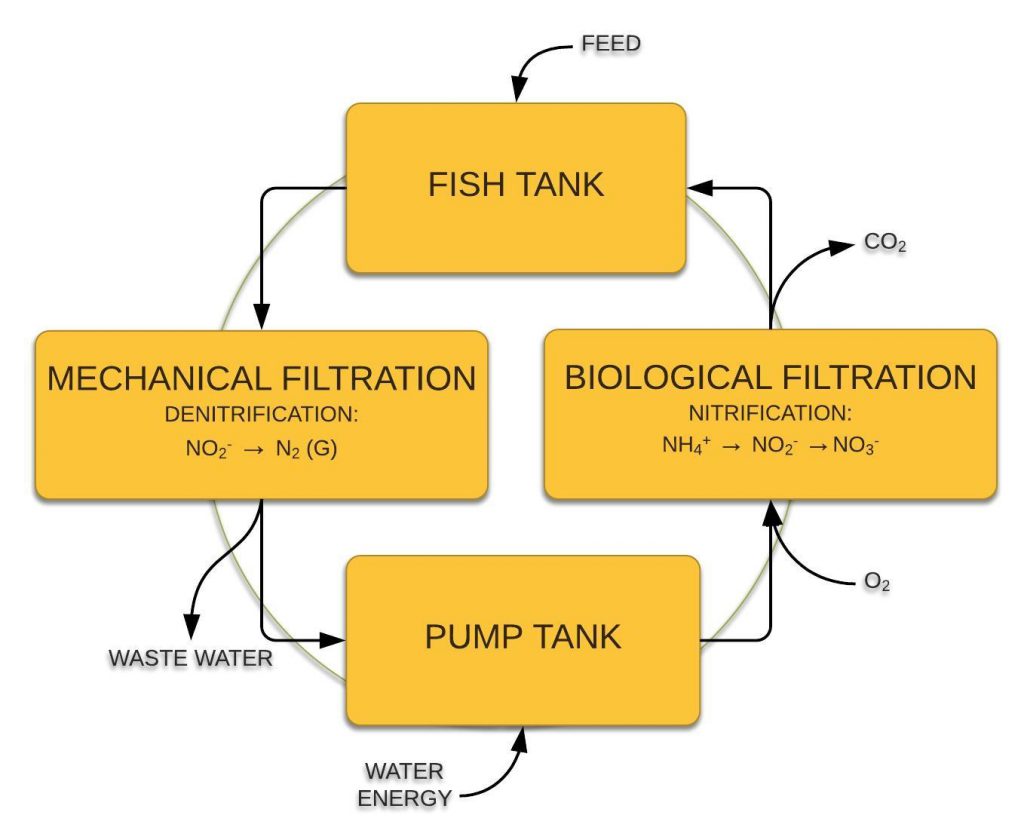 In a RAS system the mechanical filter is used to remove the suspended solids from the system water flow. These solids, primarily faecal matter, need to be removed in order to maintain water quality. Depending on the situation we either choose for drumfilter(s) or sedimentation filter(s).

The solids are allowed to settle on these filters. The settled particles form a layer of silt on the bottom of the sedimentation tank. This silt is biologically very active: up to 60% of the nitrates produced by the biofilter are denitrified by the bacteria in the silt into nitrogen gas.

Depending on the feed load on the system, the sedimentation tank must be cleaned regularly. The silt and water for cleaning is drained to the waste water sewage system in the farm. After this mechanical treatment, the system water flows to the next filter stage. 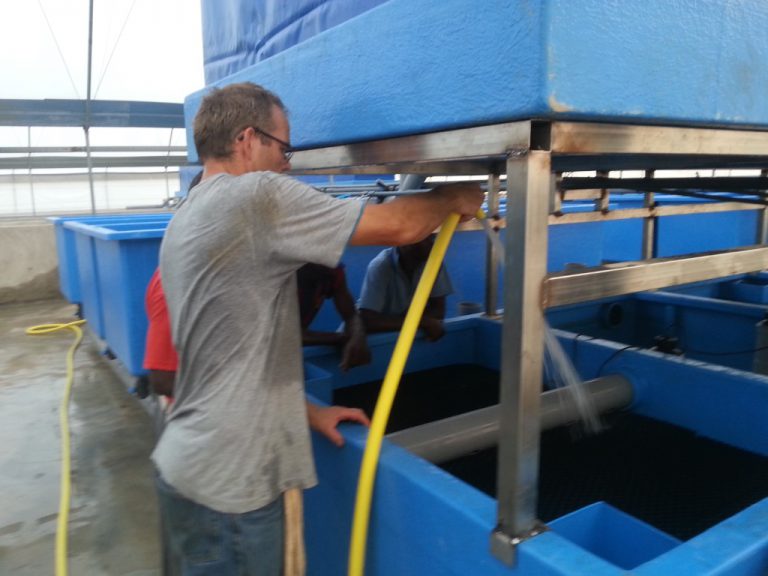 The system water coming from the fish tanks can also be mechanically cleaned using a drumfilter. Suspended solids are continuously and automatically removed from the system water and therefore the drumfilter requires no daily maintenance.

Due to the clogging of the filter screen the water level inside the drum will rise. As a result, the flushing mechanism is put into operation. The drum starts to rotate, and from the outside of the drum water is sprayed under high pressure from nozzles through the filter cloth, hereby flushing the waste particles from the screen.

Together with the waste particles the water is discarded in the gutter. Different filter screens can be chosen depending on fish species and fish size. 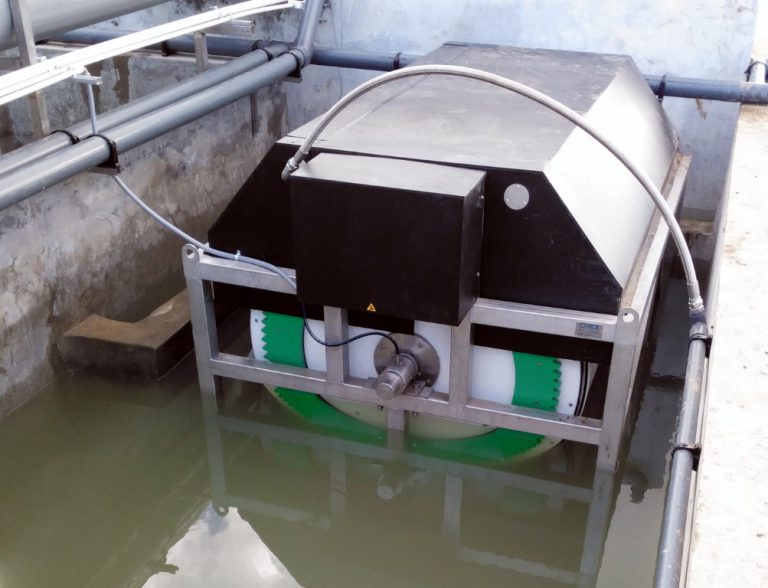 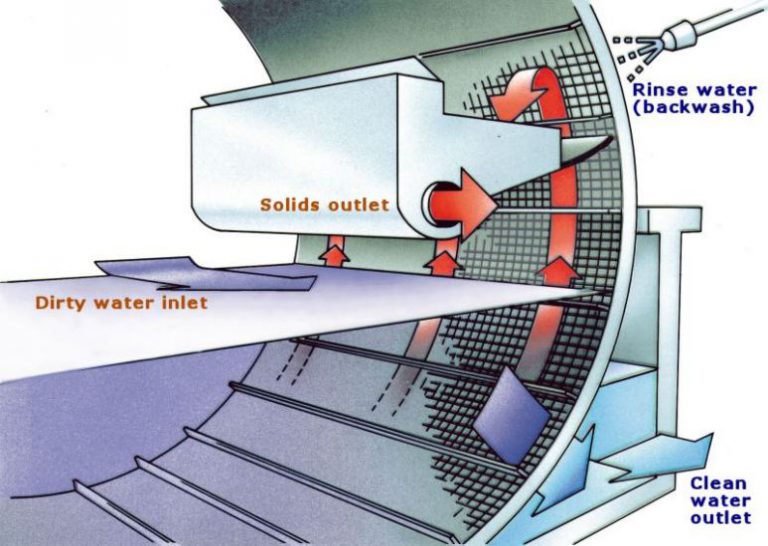 Explanation of how a drumfilter works 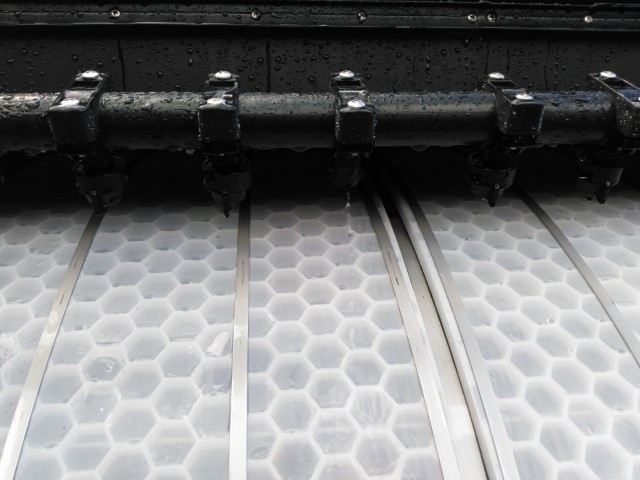 The inside of a drumfilter

NH4 or ammonium is produced by the fish during digestion of the feed. It is a waste product of protein digestion. The ammonium is toxic for fish. Ammonium (NH4) however is used by certain bacteria for energy production.

These bacteria are present in the biotower of a recirculation system and transfer NH4 into nitrite, NO2, in an aerobe environment. Like ammonium, nitrite is toxic for fish at high levels, but will cause problems at lower concentrations already. Nitrite is also used as an energy source for certain bacteria in the biological filter.

These bacteria transfer nitrite in the relatively harmless nitrate (NO3). In a recirculating aquaculture system there are parts created where these bacteria can grow in optimal conditions. Like the biotower and moving bed filter (also known as upflow filter).

From the pump tank the system water is first pumped to the biotower, also known as trickling tower or degassing tower. A biotower consists of polypropylene net filter blocks suited for bio-filtration. On top of the biotower the water is dispersed over the filter material.

The water flows through the filter packs to the biotower reception tank or directly back into the pump tank. A biofilm of nitrifying bacteria is formed on the surface of the filter packs . A biotower can also be added to the system to remove dissolved gasses (i.e. CO2) from the water. In that case, we speak of a degassing tower. 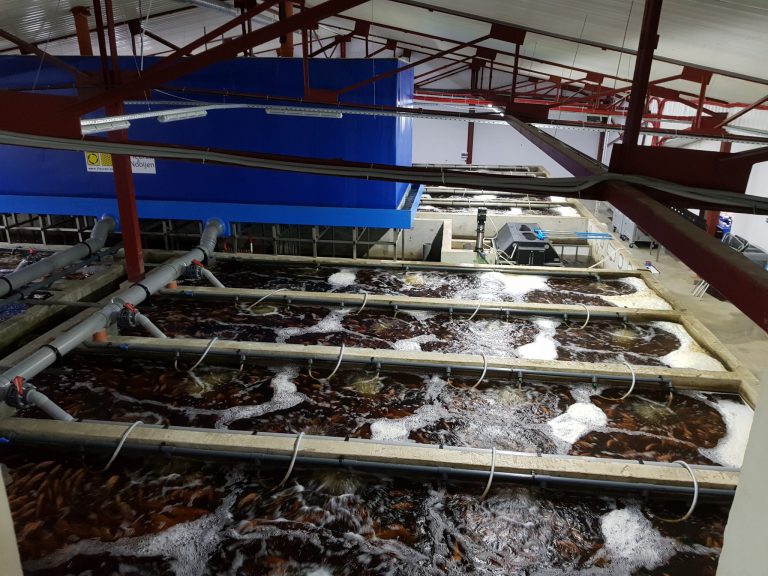 Example of biotower (blue tower, filter blocks are inside). (Project in Ukraine) 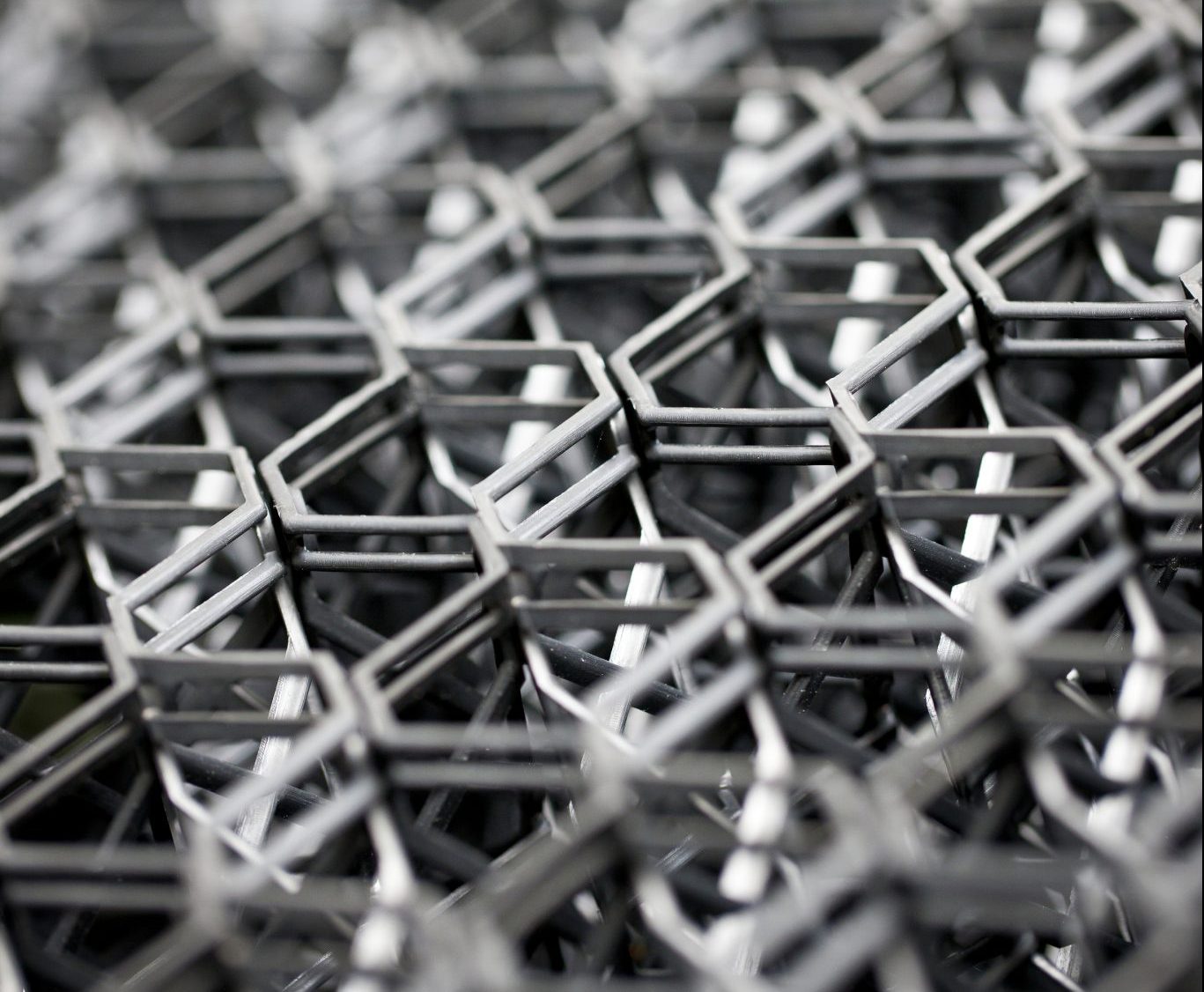 Example of filter blocks on which the nitrifying bacteria grow

Read Also: How to determine if the Oxygen Level of the water in your Fish Pond is enough

Another biological filter is the moving bed filter. These filters have a high filter capacity with low volume. The moving bed filter consists of a tank with aeration device and is filled with filter beads (many shapes and sizes available). A biofilm of nitrifying bacteria grows on the surface of the beads. 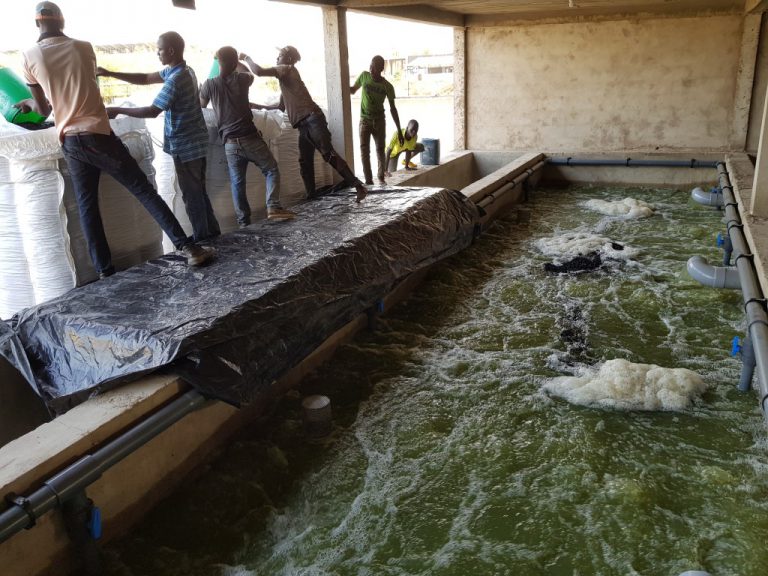 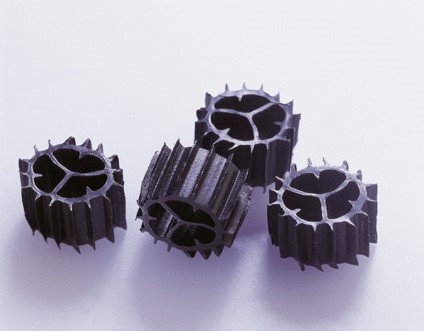 Example of filter beads on which the nitrifying bacteria will grow

Other elements of a Recirculating Aquaculture System

This light is electromagnetic radiation just below the visible light spectrum. The wavelength of UV-C light is 200-280 nanometers.

UV-C light is highly germicidal and has an antiseptic effect. With the use of irradiation of UV-C light to a contaminated surface, or in running water, it is possible to control excessive growth of micro-organisms including bacteria.

UV disinfection is a proven method to kill off bacteria, viruses and fungi, but first and foremost to keep the system water clear and free of small particles even at low dosage. 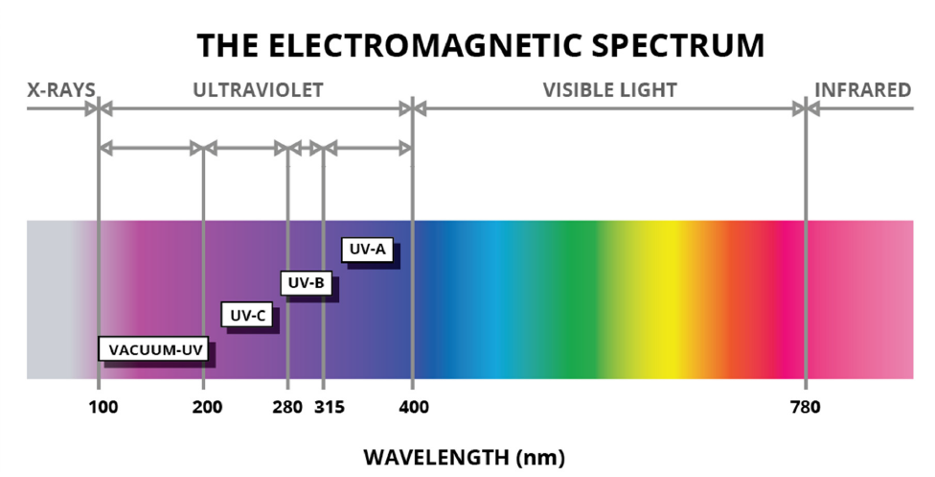 The need for high quality human food grows as the world’s population grows. Most of the world’s wild fish populations are now at or beyond maximum sustained yield, meaning that additional harvest only reduces the fish available for next year’s catch. In addition, there is concern that wild caught fish may sometimes be contaminated with mercury or other pollutants.

Aquaculture is seen as a way to produce more fish from a controlled environment. However, traditional extensive aquaculture (ponds, raceways) requires an abundant water supply.

The same human pressures that increase the demand for fish also decrease the water available to grow them in. All of these factors encourage the use of recirculation aquaculture, where a large amount of high quality fish can be grown in a small amount of water.

The engineering and biology behind recirculation aquaculture is well established and you will learn the details of these in this course. The economics (essentially competing in price with wild caught fish) is currently the limiting factor preventing broader commercial development of aquaculture. At this time, most successful recirculation enterprises focus on niche markets of high value fish. Recirculation technology is not feeding the world…yet

The design of your recirculating aquaculture system will depend on the specific requirements of the species you want to culture.

When designing a recirculating system, it is important you understand the impact of different factors on a species. These factors include water quality requirements, stocking density and size of stock, feed types and disease.

The costs of establishing and operating a viable recirculating aquaculture facility are usually much higher than most people anticipate.

Here are some Amazing Recirculating Aquaculture System (RAS) in Fish Farming books to guide you further: 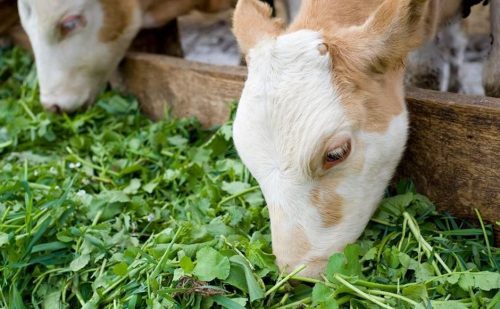