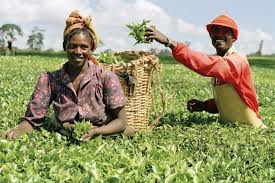 There are several challenges which hinders the improvement of field crop production across different regions and states thereby affecting crop farmers. After series of efforts made by our team to figure the best measures that can be used to improve this challenge, below are some of the measures of improving field crop production we discovered using our country Nigeria as a case study which can also work within your own location as well.

To achieve accelerated development in food crops production in Nigeria there is need to have a market orientation approach toward production process. Without selling their produce, farmers cannot usually raise enough cash necessary for farm maintenance and improvement, whether in form of a new plough, seed or fertilizer, extra labor or insecticide nor provide for his family. Markets and prices depend on access to sale this respect.

The fewer and poorer the roads, the lower will be the gain of the farmer, because the cost of moving the farm products will be too high. Farming communities also need better water supplies.

Bringing good quality water nearer the farm reduces the time spent in collecting it. Provision of health care facilities closer to the farmers would enhance their health status and productivity.

Development of infrastructure does not in it self produce more food but it strengthens and encourages the farming population and also helps to create an enabling environment for crop production to thrive and prosper.

Government need to put in place incentives that would ensure stable prices high enough to stimulate and encourage farmers to produce more. Farm price support has been proved very successful in the EU- to point of over production. It is hoped that if implemented here, would produce similar results.

Read Also: The 4 Constraints to Crop Production in Africa

Because inputs are very expensive for most peasant farmers, incentives are usually necessary if they are to be adopted on a significant scale. Incentives can take the form of direct subsidy, improved access to credit and granting ownership of land to peasant farmers. However subsidies need to be implemented with care to avoid corruption.

Government agriculture development agencies are created to help the farmers through training and extension, to implement government policies and monitor performance. But unfortunately such government staffs are poorly motivated and ill- equipped. Extension services are frequently ineffective due to low morale among extension officers.

This may be due to a top- down approach, under-funding, recommendation that is too complex or costly. In addition there are severe logistical problems in disseminating information to a large numbers of small-scale farmers scattered over the vast areas in the Savanna. Most of the programs for accelerated food production program are typically designed top-down approach instead of bottom-up planning.

That is why most of these programs remain out of touch with farmers’ real constraint and abilities. A ‘them-and us’ mentality develops, so that soon, staff and beneficiaries have different attitudes to and expectation from the project.

There is little identification by the people with the objectives of the program, and no local enthusiasm to take it over and develop it. These are not inevitable results, but avoiding them needs great imagination, careful planning and inspired leadership.

4) Transfer of Technology and Green Revolution

Transfer of technology could be described as an attempt to overcome local problems with exotic technology is the green revolution. More accurately referred to as the seed-fertilizer revolution, has centered around the simultaneous adopted of high-yielding varieties and greatly increased levels of chemical fertilization.

Pesticides, especially insecticides, have been required to counteract the greater susceptibility to pest and diseases associated with this combination, and improvements to irrigation and husbandry have frequently been added to the package.

The seed-fertilizer revolution is based, then, on a package of inputs, most of which represent technology transferred from elsewhere but adapted to local condition through regional or national research programs.

Very large increases in production have resulted from rapid adoption of this technology in a number of countries in Asia and Latin America but with limited successes in Africa south of the Sahara.

This is partly due to scarce resources and poorly developed infrastructure to take full advantage of the new technology. To take advantage of this technology in sub-Sahara Africa the following need to be put in place:

Many crops of significance in Nigeria i.e cassava, maize, sweet potatoes, taro, rice, groundnuts, sugarcane, cocoa and rubber had their origin from other continents but where introduced into Nigeria many years ago. In this unit field crops where classified according to their botanical similarities, their uses and some special peculiarities.

Introduction to Plantains and their Environment

One thought on “Measures of Improving Field Crop Production in Nigeria”