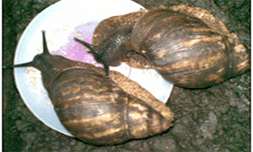 The snail is said to be a monotreme because it possesses both the male and female genital parts together in the one opening. Even though the snail is a hermaphrodite fertile eggs are only produced by cross fertilization when two snails mate. After mating, both may be capable of laying fertile eggs.

During the mating season which begins in spring the edible snails seek each other, smell and nib bleach other and then join themselves for a very long coition of several hours, side by side over the horizontal plane.

Using Giant African land snail which is popularly called the giant snail as an example, They prick each other with a calcium dart and after numerous pricks with this dart the pouch containing the vagina and the penis turns in on itself.

There is a reciprocal introduction of the male organ into the female conduit and the sperm received is then stored. At this time the genital gland issues no eggs.Once mating is completed and the two snails separate the male part is absorbed and the female part develops.

The spermatozoa leave the copulative pouch and move toward the top of the genital tract in order to impregnate the eggs that are discharged by the hermaphroditic gland.

If the snails are placed in conditions for reproduction that have optimum temperature, lighting and humidity the average time between mating and egg laying is 5-10 days.

The snail is able and does mate and lay more eggs during the season as long as favorable conditions and nourishment are provided. Helix Aspersa while under scientific observation were found to mate again after a period of about 15 days.

In order to lay its eggs the snail will dig a hole and burrow to a depth of between 4-9cm deep.It then deposits its eggs and leaves.

The ideal soil conditions need to be friable and moist but not saturated and the provision of small plastic garden pots filled with a top quality potting mix prove most suitable for this purpose.

The eggs of the garden snail or african land snail are spherical and translucent, white in color and have a diameter of between 3-4mm. The giant African snail for example lays its eggs in batches the number can range from 40-130 the average, being approximately 70-90.

Hatchability of eggs depends on soil temperature, soil humidity and soil composition. If these conditions are available the baby snails which are very small but fully formed baby snail will emerge within 18-21 days.

Snails will start to lay eggs when they are sexually matured at 8-12 months or when their weight is between 110-125g.  Snails would continue to lay eggs both in the rainy and dry seasons under domestication.

1. Care for hatchlings or baby snails:

2. Care For The Growers

How much constructing a pen house will cost you 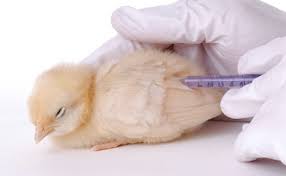