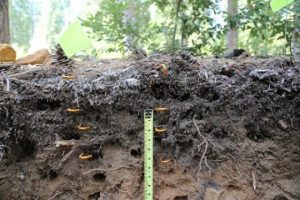 As environmentalists focus on the International Year of Forests, there has been much attention on destructive logging in Africa’s rain-forests, including in the Democratic Republic of Congo.

Deforestation is a process where vegetation is cut down without any simultaneous replanting for economic or social reasons. Deforestation has negative implications on the environment in terms of wildlife and increased desertification among many other reasons.

According to data taken over a five year period from 2000 to 2005, Nigeria has the largest desertification rates in the world with loss of 55.7% of its primary forest.

The annual rate of deforestation in Nigeria is approximately 3.5% which is between 350,000 and 400,000 hectares per year. In Nigeria forest has been cleared for logging, timber export, subsistence agriculture and notably the collection of wood for fuel which remains problematic in West Africa.

A lot of damage has been done to Nigeria’s land through the process of deforestation, notably contributing to the overwhelming trend of desertification.

The same study also found in the same period of time that the amount of rainfall has decreased from by 81mm. it was noticed that both trends simultaneously had sharp changes in the 1970. From 1990 to 2010 Nigeria nearly halved their amount of forest cover moving from 17234 to 9,041 hectares.

The combination of extremely high deforestation rates, increased temperature and decreasing rainfall are all contributing to desertification in the country.

How to save forests and wildlife while stabilizing our climate

Ending deforestation is our best chance to conserve wildlife and defend the rights of forest communities. On top of that, it’s one of the quickest and most cost effective ways to curb global warming. That’s why we’re campaigning for a deforestation-free future.

Working to end deforestation and forest degradation while helping to restore lost forests is our best chance to solve the climate emergency, protect wildlife, and defend the rights of Indigenous Peoples and traditional local communities. That’s why we are campaigning for more forests tomorrow than there are today.

Greenpeace’s forest campaign historically has called for an end to deforestation but our current climate emergency requires a genuine and just restoration of all natural ecosystems, and reduced degradation of the world’s most critical landscapes.

The threats to nature vary from region to region. For example, in the tropics, agribusiness clears forests to make space for things like cattle ranching, palm oil, and soy plantations for animal feed. Demand for wood products can threaten forests around the world, whether it is for throw-away paper products or hardwood flooring.

In too many parts of the world, ineffective or corrupt governments make things worse by opening the door to illegal logging and other crimes.

1) The Power of the Marketplace

If corporations have the power to destroy the world’s forests, they also have the ability to help save them.

Companies can make an impact by introducing and implementing “zero deforestation” policies that clean up their supply chains. That means holding their suppliers accountable for producing commodities like timber, beef, soy, palm oil and paper in a way that does not fuel deforestation and has a minimal impact on our climate.

Companies not only must make these policies but they must follow through on these promises, maximize the use of their sphere of influence, and collaborate with other like-minded institutions in their sectors, demanding suppliers transform the way our economy works so that nature is protected and human rights are respected.

Companies should set ambitious targets to maximize the use of recycled wood, pulp, paper and fiber in their products. For the non-recycled products they buy, they should ensure that any virgin fiber used has transparent, credible assurances that it was sourced in a legal way that respects principles of environmental and social responsibility. Third-party certification like the Forest Stewardship Council can be a starting point in evaluating sourcing.

That’s why we’re investigating, exposing and confronting environmental abuse committed by corporations. Thanks to your actions, major companies are changing their ways and building solutions to protect jobs and our forests.

Forests around the world have been home to Indigenous Peoples for tens of thousands of years. Evidence shows that when Indigenous Peoples’ rights to traditional lands and self-determination are respected, forests stay standing. But too often, corporations and governments overlook or intentionally trample the rights of Indigenous Peoples.

You can make a difference in the fight to save forests by making informed daily choices. By consuming less, avoiding single-use packaging, eating sustainable food, and choosing recycled or responsibly-produced wood products, we can all be part of the movement to protect forests.

Make choices for forests, nature, and people and do so vocally!

If we’re going to stop deforestation, we need governments to do their part. We need world leaders to embrace ambitious domestic and international forest conservation policies based on the latest science, allowing us to live in a world that avoids severe climate disruption.

Take Action for a Deforestation-Free Future

If you’re ready to join the movement to protect Forests, Wildlife, and Our Climate, here’s how you can start:

Ideal Distance between a Ruminant Farm and Residential Areas

Find out: “Earthen Pond vs Concrete Pond” Which one is Better?

How often to allow Visitors in your Farm