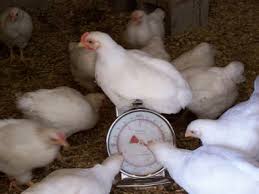 Monitoring the average weights of your flock from day one is a very important management tool in poultry farming and this calls for all commercial poultry farmers to own digital weighing scales.

However, any poultry farmer keeping broiler breeders, pullets or layers must also check the weight development of his birds closely. Too high or too low weights always have a negative effect on the production results and also mean that the farmer is not taking full advantage of the birds‘ genetic potential, which in turn influences the farm’s profits negatively.

About 10% of the flock is measured from different points of the house randomly.

1. In the early stages of life of a flock, weighing will help u find the average weight and uniformity of the flock weekly for key decisions to be made.

2. Note that young birds being extremely beyond the average weight in the guide might indicate danger.

3. Weekly measuring is not advised in actively laying birds since it can cause stress especially in very hot days but it can be done in cases of in explained reduction in production.

4. Remember the best weights for egg production in layers is between 1.6kg to 2.0kg so do not expect bird below 1.5kg to lay and those above 2.2kg are tending to the obesity point which is associated with issues like prolapse.

5. In case of disease, stress, change in quality and quantity of feed etc, bird can lose around 50g to 100g per week sending it to a level in weight where it can not lay any egg. This has been the case to many experiencing serious production declines.

Read Also: How to Construct your Poultry Pen

Continuously weighing your farm animals provides an up-to-date overview of the growth process in your house and insight into animal activity on a daily basis.

The easiest way to weigh a live chicken is to place it headfirst in a sheet metal cone. Adjust the scale for the weight of the cone, or subtract its weight from the scale reading.

Meanwhile, It is not necessary to weigh all the chickens. A sample of five or ten percent of what appear to be average – size birds will do.

Now let’s take weighing of broilers for instance to explain further for clearer understanding below.

On farm weighing helps you to meet these requirements.

There are two types of weighings

These are occasional weighings and give a snapshot picture of the situation at the time they are taken. They may be used in the last week or two, just to check that your broilers will be bear to the final target weight.

Or they can take place at intervals through the crop to check that the weight for age is in line with the breeder’ target for that age. In other words, to see if they are growing along the growth curve recommended by the breed company supplying the birds.

The logic of this is that if you can keep them on or close to this prescribed growth curve all the time, they WILL be on target weight at kill!

If you can weigh birds every day, you not only see if they are on the target weight for that day, BUT you can also see that the daily Live Weight Gain (LWG) is on target. Any fall off in daily LWG can give an early sign of impending disease or of a management problem.

How to weigh broilers

Young broilers can be weighed in groups of 10, 20, 40 etc depending on their age and size of the container you use to weigh them in. This is normally slung or suspended from a mechanical scale from the ceiling.

If you do this a number of times in different parts of the house, you will get a series of average weights. Taking the average of these will give you the best estimate of the house average. Bigger broilers need to be weighed individually.

Some people put a loop of cord round their two feet and suspend them upside down from a scale hung from the ceiling. Broilers don’t like this and struggle and flap, making it difficult to read the scale properly. It is also very stressful to the birds and it takes them time to get over the trauma before they start growing normally again.

There are open-ended weighing cones on the market, which hang from the scale. You put a bird into this head first, and the sides of the cone stop their wings flapping.

A) The procedure is stressful to birds and slows their growth.
B) It is a time consuming and labour intensive method, not suitable for large-scale production.

A) Number of birds

Distribution of liveweights in a flock of as-hatched broilers (source: Ross)

How many to weigh?

If you only weighed just one bird at random, then clearly, 2/3 of the time your estimate would be only within 10% of the true flock average. This is not good enough, so you must weigh more.

Read Also: How Poultry Farm Odors can be Tackled

Catchers tend to catch heavier birds because the smaller ones get away! So the estimate of flock average may be too optimistic.

1) No stress on the birds. Some scales are attractive to the birds because they like to hop up to a higher level.

2) Can get weights every day.

3) Large numbers are weighed, so the estimate of the house average is good.

4) Better mathematics can be build into the software programme involved to estimate the true average better.

5) Data can be observed on the control box in the broiler house or on a computer in your office via a cable linked to a large number of control boxes in different broiler houses.

6) These weights can be shown as graphs. For example:
• Actual daily weights compared to the breed target growth curve.
• Percentage deviation from each day’s target.
• Daily LWG compared to breed target.

7) Data and graphs can be accessed, via a modem from a remote computer, (say in the farmer’s house or a company head office).

8) Can be incorporated into management and nutrition control systems for profit optimisation. 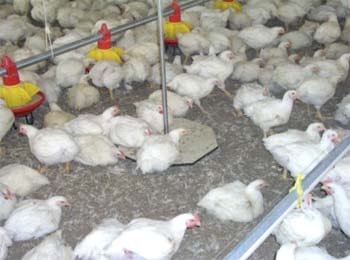 There is a capital cost of installation of the equipment, though maintenance cost can be low.

These are normally metal boxes, which are placed on the litter and are linked by a cable to a control box in the broiler house. They weigh one bird at the time and are self-tareing when no birds are on the scale. In other words the empty weight of the scale is zeroed each time to allow for build up of muck on the scale.

When a bird gets on the scale, the scale records a higher weight. It allows for oscillation in the recorded weight, and when the weight is stable, it will be recorded if it meets certain criteria.

The weight has to be within a set percentage of the expected weight for that day. If it is not, (for example, if two or more birds go on the same time), the weight is discarded as not valid weight. These scales can give reasonable accurate estimates of the average weight.

Disadvantages of a platform weigher

1) The scale has to be empty of birds before the next bird weight is recorded. So if several birds stay on the scale for some time, no weighings are possible before they ALL get off!

2) The load cell and the electronic equipment in the platform weigher itself are near the litter where a build up of dampness and ammonia may take place. Over time, this can get into the electronics and cause failure.

3) A cable has to lead from the scale to the control box. At least part of this is on or under the litter, and can be damaged by birds or otherwise.

These work on a different principle. They comprise a larger, 50 cm round platform suspended via load cell and electronics from the ceiling. The platform is fixed in the centre which enables the birds to get on and off from all directions (see picture). Many birds can be on the platform at the same time, depending on their size.

2. Broilers like to hop up to a higher level, so the scale is occupied most of the time.

3. The electronic and load cell are in the ceiling, well out of wet and ammonia, and is in situ between crops.

4. Cables are permanently fixed from the load cell and electronics, back to the control box, out of reach of the birds and are much less likely to be damaged.

1. Total weight on the scale can be high, so a really secure fixing to the ceiling is required. A flimsy screw hook can be pulled out.

2. The capital cost may be higher.

Current use of broiler scales

Hundreds are now in use in Europe and in America. Major companies are examining the various options and some are now buying in volume.

We will need to get broilers to market age at more exact weights, (at least to within 2% of the target), to meet supermarket and consumer demand. To do this we will need to exercise better management control of broiler growing.

Whatever the industry, you cannot exercise management control if you do not have accurate management information!

Knowing what your broilers weigh on a day to day basis is essential if you want to get them to market age on the target weight in the best, most cost effective way.

If you see deviations from the proper growth curve starting to develop, you have the opportunity to do something about it quick enough to get them back on the correct growth curve again.

Without this information, you may not even know there is a problem until it may be too late to do anything about it!

What to do about it may involve looking at the daily feed intakes and the daily nutrient intakes of the birds compared to breed targets. There are proven computer programmes available to help you do just that. 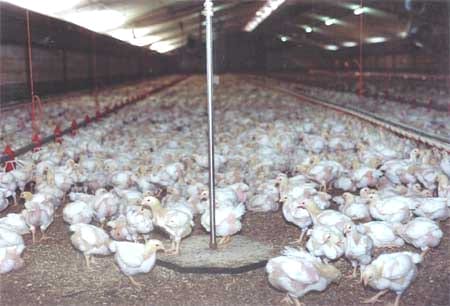 In the battle of cats vs. rats, the rats are winning

Where the Best Strawberries Grow