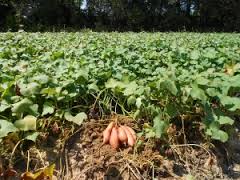 Sweet potatoes are being planted on mounds, ridges or flat beds meanwhile good soil aeration is also required for storage root initiation, growth and higher yields, therefore the height of the mound or ridge to be used is very important.

The mounds and ridges to be used must ensure good drainage, making it easier to harvest the mature roots, especially when harvesting is done in a piecemeal fashion as is often the case with sweet potatoes.

Whether mounds or ridges or beds are used, their sizes always varies among locations, usually based on what is actually most practical for farmers in that area.

In situation where tractors or ox-ploughs are available, ridges are typically preferred, but ridges, mounds and beds may all be prepared manually.

Land preparation for planting is the single most labour-intensive part of sweet potato production. In households where there are labour shortages, sweet potato may be planted in flat beds, although this typically results in lower yields than when ridges or mounds are used.

Sweet potato vine cuttings or sprouts, at least 3 nodes (about 20-30 cm) long are usually planted at a spacing of 25-30cm between plants and 60-100 cm between ridges, although farmers like to experiment with different spacing’s and will usually plant varieties with trailing vines wider apart than those with semi-erect or erect vines.

Where sweet potato is grown on mounds, farmers usually plant 3 vines per mound with some space between the vines.

Adjustment of spacing can be used to control storage root size, with closer spacing producing a greater proportion of smaller sweet potato roots, which are preferred by some markets.

To plant, a stick, machete or hoe is used to make a hole that most of the cutting (at least two nodes should be under the soil to enhance establishment and increase the number of roots that form) is placed into the soil, leaving only the tip exposed.

The soil is firmed into place to ensure good contact between nodes and the soil. Sometimes lower leaves are removed before planting, but this is not necessary.

Farmers sometimes hold cuttings for a day or two in a cool, shady place to encourage root initiation prior to planting. In many places farmers traditionally use two vine cuttings per planting hole, however this requires a lot of extra planting materials, and extensionists recommend using just one cutting per hole and then gap filling any plants that fail to establish.

Sweet potato is often planted after the priority cereal crops and other important cash crops, and when sufficient planting materials have been generated by the rains.

However, in areas with a short rainy season these delays in planting can end up exposing the sweet potato crop to drought periods and weevil damage, significantly reducing potential yields. 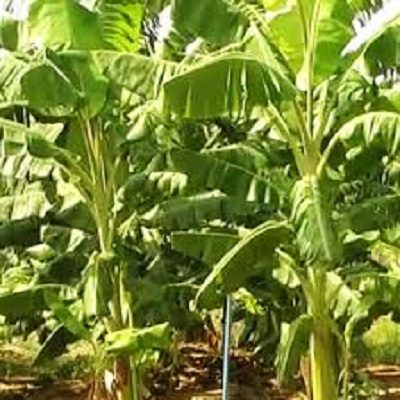 The Recommended Spacing for Plantain Cultivation 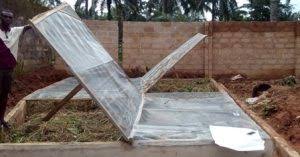