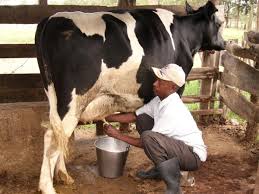 Cows only produce milk after they have given birth, and dairy cows must give birth to one calf per year in order to continue producing milk. Typically they are artificially inseminated within three months of giving birth.

These high-production cows produce milk on average for less than three years, after which they are culled and their meat used for beef.

The average lactation period for a dairy cow is 305 days. In that time a cow can produce around 22,000 pounds of milk. At 8.6 lbs of milk per gallon, this comes out to approximately 8 gallons of cow milk per day.

Those numbers are for a Holstein, that is the breed of cattle with the highest milk production and it is what most dairy farmers in the US, use for milk production.

Something like a Jersey cow, which many dairy farms also keep due to the high butterfat content of their milk, can produce anywhere from 1 to 6 gallons of rich milk per day.

Beyond the diet, rearing conditions and herd management have a direct impact on the amount of milk produced per cow per day. The first step to be implemented consists of undertaking an audit. The conclusion drawn from this audit will help identify areas for improvement.

This process will take various factors into account : nutrition, health, environmental and herd housing by focusing on the following points:

How a Cow Make Milk

Before cows can make milk, they must give birth to a calf. Typically, cows become pregnant with their first calf at a year and a half of age. Farmers usually know a cow is ready to be bred by her behaviour.

Dairy farmers spend many hours in their barns each day, and as a result, know their herd well. When a cow enters a fertility period (also known as a “heat”), she is usually bred shortly thereafter.

Depending on the farm, female cows are either bred by a bull, or through a process known as AI. Some farms have a bull on farm, and use a combination of bull breeding and AI.

Farmers have a close relationship with their veterinarian, who makes routine visits to their barn. A farm’s vet checks up on cows that are bred in order to confirm pregnancy. These checks are important to monitor the herd, but also for the health records of individual cows.

A dairy cow will have her first calf when she is around two years old. Since farmers keep detailed records, they watch their cows carefully around due dates. Most cows calve unassisted, but sometimes a cow requires their farmer’s intervention if the birthing process proves prolonged or difficult. Veterinarians are on call should a complication in delivery arise.

Calves are usually delivered in a part of the barn separate from the rest of the herd, where the mother cow has privacy and her own space. The farmer prepares the delivery area by providing fresh, clean, and comfortable bedding. Witnessing or assisting in a birth is a humbling experience for many farmers. Even those who have been farming for a long time report that it is a miracle each time a calf is born.

After a cow gives birth, the farmer immediately attends to her needs, and the needs of the calf. The farmer inspects the calf to make sure that he or she is in good health and with time, able to stand. At this time, the mother typically licks the baby clean, or is assisted by the farmer, who may towel dry the calf.

The first feeding is very important to a calf’s wellbeing, as its mother’s milk contains essential nutrients required to protect from diseases and build its immune system.

The milk a cow produces after giving birth is called colostrum. Colostrum is thick, creamy and golden-hued. Calves should drink colostrum within the first few hours of their life.

Most farmers, after performing a health check, milk the cow shortly after birth. This practice ensures that there is enough colostrum to feed her calf right away. The farmer will typically bottle feed to make sure the calf receives all the colostrum he or she needs.

The health of both the mother cow and calf are monitored closely during this time. The farmer makes sure the mother cow is comfortable, with access to nutritious food and water as she recovers from birth. Additionally, the farmer then records the calf’s birth date, gender, and names the calf.

The majority of milk produced on a dairy farm is for the purpose of feeding Canadian families. In a dairy system, cows produce many times more milk than their calves are able to drink. Once calves are deemed healthy, they are typically moved to the calf nursery to be cared for by the farmer.

The farmer is able to monitor the calf closely, ensuring it receives the nutrition and medical care needed to get a strong start in life. Caring for calves individually in their early stages also decreases the likelihood of them contracting an illness disease before their immune system is fully developed. The cow returns to the main part of the barn and joins her herd-mates.

Dairy cows are most comfortable when they maintain a consistent milking routine. Cows are typically milked twice a day, or increasingly, choose their own time to be milked.

On a farm where cows are milked twice a day, the farmer typically wakes up early and makes his or her way to the barn. At this time, the herd is guided into the milking parlour, where the farmer has the chance to take a look at each cow and clean her udder.

The farmer then attaches a milking machine, which is made from soft rubber or silicone suction cups. These suction cups are fitted around each teat to create a vacuum, which causes the milk to be released by gentle pulsation (without causing discomfort for the cow!). It takes about five to eight minutes for milking to be complete.

Milk machines are automatically removed when a cow is done milking. She can then head back into the barn to eat, drink, relax and socialize with her fellow herd-mates.

Cows produce milk for about 10 months. After a 10-month period, each cow will have two months of rest. This period of time (known as “the dry period”) is important for cows to rest and prepare to give birth to another calf.

While a cow is taking a two-month rest, the farmer adjusts her diet, with the help of an animal nutritionist. This adjustment ensures she has the right balance of nutrients to promote a healthy birth.

6) From Field to Table

Dairy cows are ruminant animals. This means they have a unique digestive system made up of 4 stomach compartments, with each compartment playing a specific role in assisting digestion.

The rumen and the reticulum are primarily for eating and breaking down food into smaller pieces, whereas the omasum and the abomasum are used for digesting food.

The udder has four ‘quarters’ where milk production occurs. It can take up to two days for a cow’s food to become milk. On average, a cow can produce anywhere between 25 and 40 litres of milk per day.

This milk is stored in a sterilized bulk tank on farm, and a licensed milk truck grader picks it up every second day.

The key variables that can allow an increase in a farm’s margin through milk production are:

Here are some amazing cow milk production guides and books to help you get started:

Causes of Regular Abortion on Pregnant Goats and Control Measures