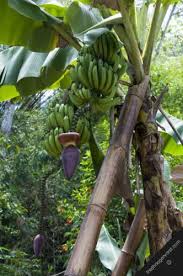 The heavy weight of the plantain bunch bends all bearing plants and can cause doubling (pseudo stem breaks), snap- off (corm breaks, leaving a part in the ground) or uprooting, also called tip-over (the entire corm with roots comes out of the ground).

Propping can simply be defined as a cultural operation of plantain / banana plant which give additional support of the plant , which bear heavy load during bunching (flower perod).

Plants are generally weak during the dry season and strong winds, nematodes and stem borers also increase the rate of loss. For these reasons, bearing plants always need support from 1 or 2 wooden props, usually made of bam- boo.

If a piece of bamboo is used, the support is placed alongside the bearing plant and the top of the plant is tied to the bamboo. A lateral branch at the top of the bamboo prop sometimes forms a natural fork which can be used to support the plantain without being tied to it.

When 2 pieces of bamboo are used, the bunch and not the plant is supported in the first place. The bamboo props are crossed and form a fork. This fork is tied together with a rope and placed just underneath the bunch.

Meanwhile at the time of bunch emergence , pseudostem requires support from props. Tall varieties which produce heavy bunches need propping. Bamboo or casuarinas poles which have effective life of 3-4 years are commonly used for propping. Coir or polythene wire can also be used for propping.

Plantain however can be grown together with other types of compatible crops (cocoa, cocoyam) or as a single crop.

According to research, Bananas (Musa spp.), includingdessert banana, plantainand cooking banana are the eighth most important food crop in the world, and the fourth most important inleast developed countries.

They are produced in 135 countries and territories across the tropics and subtropics. The vast majority of producers are smallholder farmers who grow the crop for either home consumptionor local markets. Less than 15 per centof the global production of more than 130 million metric tons is exported. Today, the international banana trade, totaling around 17 million metric tons, is worth over US$7 billion per year (FAOSTAT).

This makes venturing into a plantain plantation / plantain farming very lucrative. Africa produces one-third of all bananas and plantains in the world. In West and Central Africa these are plantains while in Eastern Africa these are highland cooking and beer bananas. There are about 120 plantain varieties and 70 highland bananas. All suffer from nematodes, weevils,and black Sigatoka.

Now away from plantain / banana propping, let us have a look at the recommended systems of planting your plantains and bananas for maximum yield and profits below:

Read Also: Mulching of Plantains and the Advantages

5 Reasons why Broccoli is good for your Health

The Best Position for your Fish Pond Water Inlet Pipe